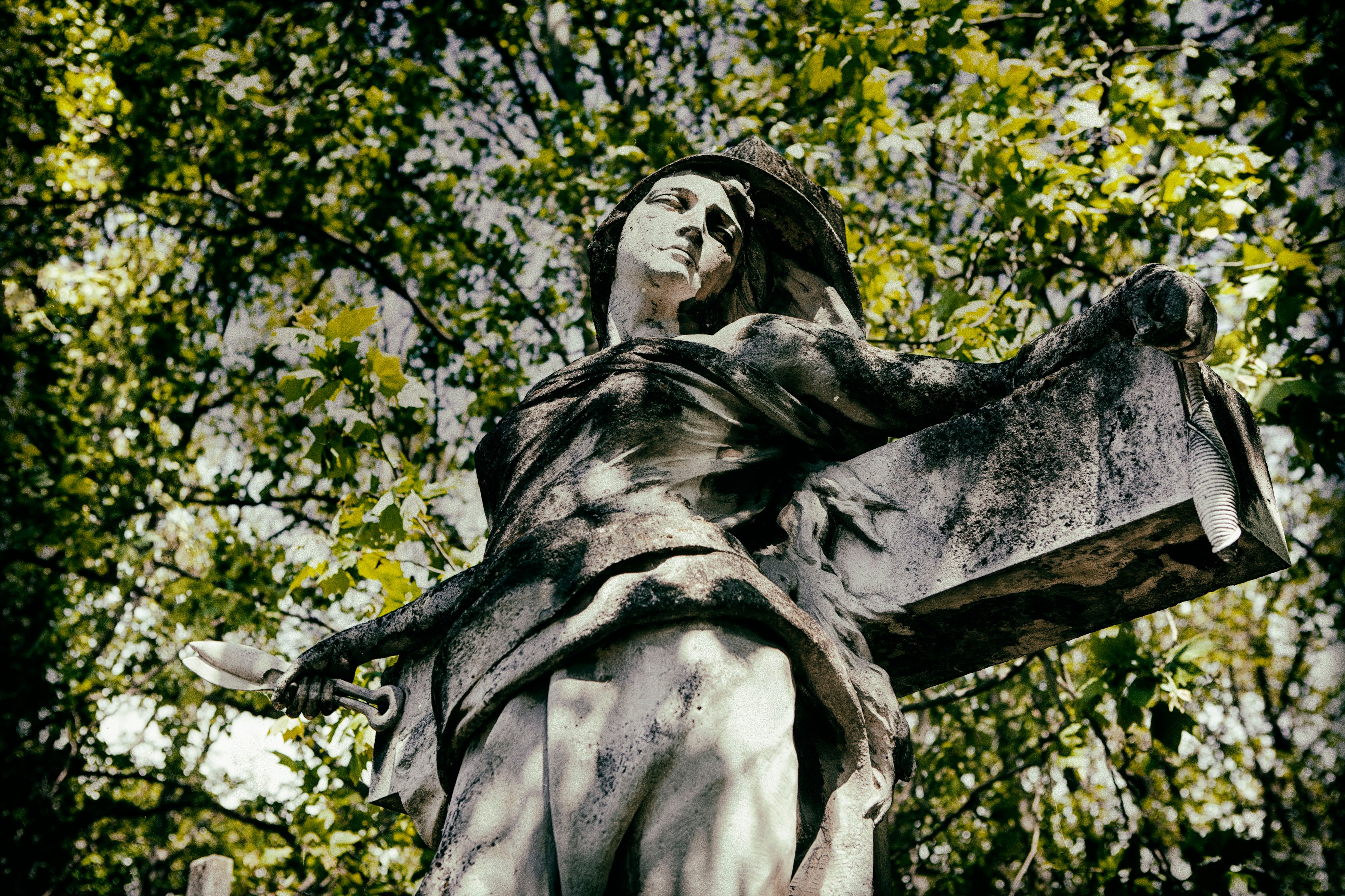 In the 1880s there was a significant shift in funerary art in that figural depictions became increasingly favoured. Whereas earlier, in the case of certain tombs the emphasis had been on architectural solutions, from this time sculpture became the dominant feature. Gyula Donáth’s work Atropos can be considered a symbol of this transformation. In its composition it combines symbolism of Antiquity and Christianity.

A female figure, Atropos, stands in front of a cross. She was one of the Moirai from Greek mythology who cut life’s thread. Her sisters were Clotho who spun the thread of life and Lachesis who measured the length. In general, the Moirai (Parcae in Roman mythology) were usually depicted separately, holding attributes referring to their activity, but here Atropos has in her hands not only shears but a spindle, too. A laurel wreath symbolizing eternal glory and the tools of the deceased sculptor, the chisel and hammer, are also shown on the pedestal, thereby paying tribute to the oeuvre of Adolf Huszár.

Some were of the belief that Donáth erred when he combined the symbolism of Antiquity and Christianity, saying that he mixed in chronological contradiction the elements depicted on the statue. Despite the negative opinions, having made this statue Gyula Donáth became one of the most sought-after sculptors in funerary art and his work marked a turning point.

During the period of Dualism, not only the population but the number of residential and public buildings in the metropolis of Budapest increased exponentially. This massive wave of construction created great opportunities for sculptors of the age. Building sculptures represent one major part of the oeuvre of Gyula Donáth, and tombs and graves the other.
Gyula Donáth, who showed a fascination with sculpture as early as his childhood, presented his first sculptural bust in 1866, at the age of 16, at the exhibition of the Pest Arts Association. One year later he launched out on serious art studies at the Munich Academy before widening his knowledge in Dresden, Vienna, Berlin and Italy.
His first larger independent works were installed on the Vienna World Exhibition rotunda and they proved so successful that the artist was later given a commission for two full-figure portraits (Athenodoros and Dioscoredes) for the Kunsthistorisches Museum. The artist, who returned to Hungary in the 1880s, won several tenders, for instance sculptures for the Opera House and Pest Vigadó, but he was also commissioned to make ornamental allegorical statues for private palaces (Andrássy út 12 and 21). For around a decade from the 1890s, Donáth was active as the most famous tomb sculptor in Hungary. He can thank this prominent role to his success in the tender announced for the tomb of sculptor Adolf Huszár in 1889. After this, Donáth made numerous tombs and gravestones in Fiumei Road Cemetery, several of which can still be seen today (for example, the tombs of Budapest’s first mayor Károly Kamermayer, the leading figure in Hungarian criminal law Károly Csemegi, the politician István Teleszky, Baron Béla Lipthay and teacher and literary historian Jenő Péterfy). Donáth also designed the original tombs/sculptures of poet János Vajda and painter Antal Ligeti, but both works have since been destroyed.
Alongside his cemetery commissions, Donáth also constantly tendered for various memorials and commemorative statues, but most of these won lesser prizes only. Perhaps his best-known work is the Bánhida Turul (mythical bird) sculpture (1899), which was followed by a second Turul sculpture in Buda Castle (1903). He is associated with the István Werbőczy statue in Budapest (1908), and the former statue of Queen Elizabeth (1903) in Bártfafürdő.
The eternally youthful sculptor famous for his humour and ‘curious Hungarian speech’ was a much-loved figure in artistic circles and his memory is preserved through countless anecdotes.