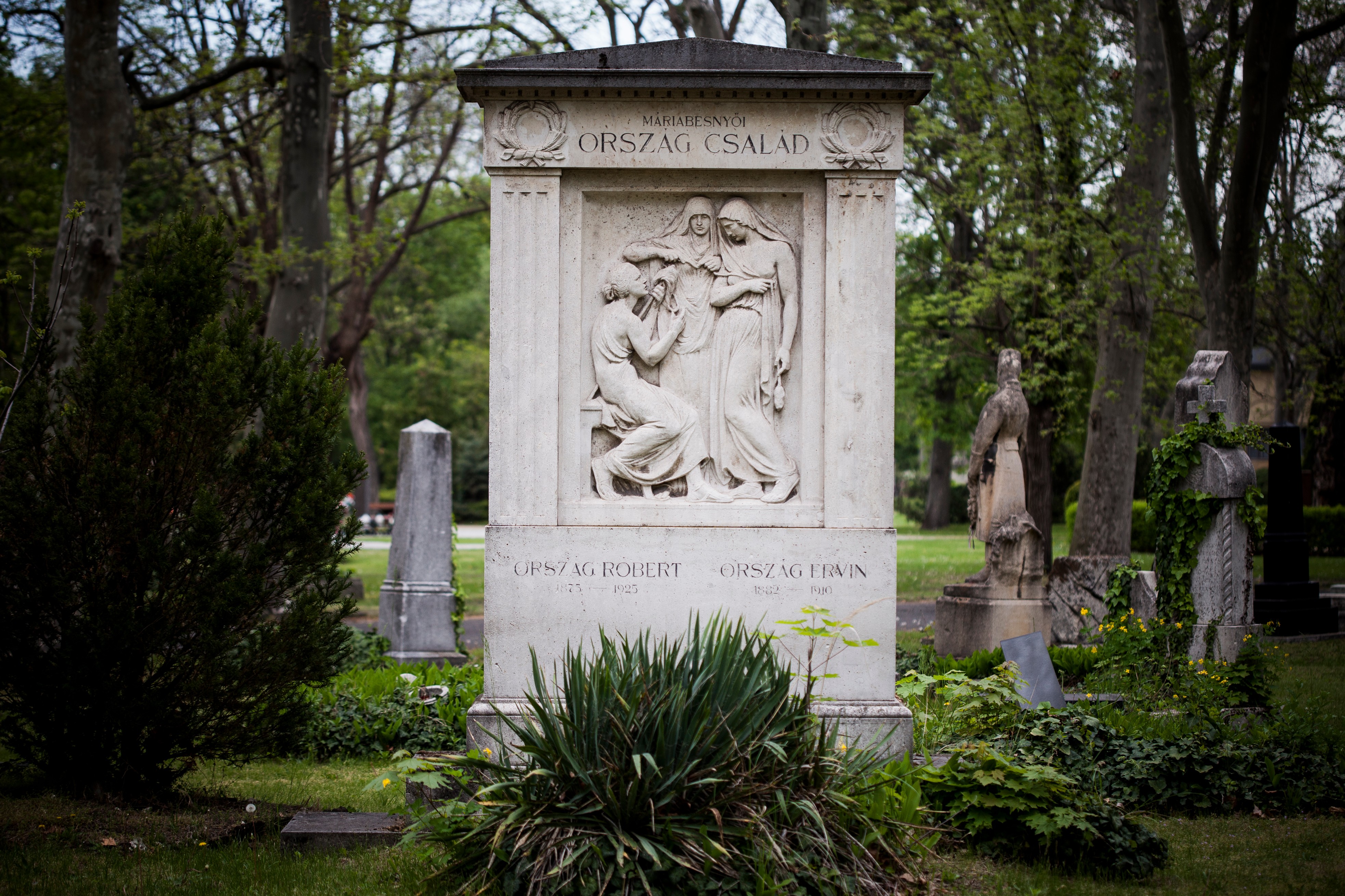 We know of more than 40 tombs made by Zsigmond Kisfaludi Strobl, but the true number is almost certainly much higher. Some of the subjects of these works are allegorical, figures reflecting the professions of the deceased, some are grieving figures, and yet others are religious or mythological figures. A fine example of the choice of mythological theme is the sculptural formulation of the Ország family tomb.

The goddesses of fate, the Moirai, to the Romans the Parcae, hold in their hands a spindle and thread, winding the thread of life. This ancient scene frequently appears in funerary art as an expression of death and passing. According to Greek mythology, there were three: Clotho, who spins the thread of each human life, Lachesis, who allots the length of the thread, and Atropos, who cuts the thread.

The concept of mortality has always engaged the human mind, how and when this earthly existence will end. The sculptural formulation of the tomb examines this eternal question through an example taken from Greek mythology.

Zsigmond Kisfaludi Strobl created his sculptures under various political systems and in the spirit of different ideologies. He worked for the British royal family, Miklós Horthy, Stalin and Mátyás Rákosi.

He showed an interest in sculpture even in his childhood, fashioning his first works from the soft inner part of loaves. His talent won him many prizes, from which he was able to finance study tours in Europe. Cities he visited included Vienna, Rome, Venice, Florence, Paris and Brussels. Similarly to his fellow artists, he too was a student of the School of Drawing, predecessor of today’s University of Fine Art.

His first collective exhibition was organized in 1909, when the state purchased his work Finálé for the Museum of Fine Art. His works from this time reflect the contemporary art aspirations of the time. In 1913, he won his first commission for a public statue: the figure of Mihály Horváth made for the town of Szentes. During the First World War he was drafted into the press corps, which allowed him to meet artists such as Bertalan Pór, Ödön Márffy, László Mednyánszky, József Rippl-Rónai and Oscar Kokoschka.
In 1918, in the space of just a few weeks, he made the figure Aster Soldier, as well as his work Archer located in City Park, copies of which made it to the United States, the Hermitage Museum and even Indonesia. Following this he took part in the artistic life of the short-lived Hungarian Soviet Republic, then he became a representative figure in the interwar period, which is when his artistic career truly burgeoned. In the 1920s he worked at the ceramic studio of Miklós Ligeti in Angyalföld.

In 1931, he completed one of his largest public compositions, a statue of Prince St. Emeric, made in sentimental neo-Baroque style. However, The Hungarian Hussar erected a year later exudes Rococo elegance, making it suitable for mass production at the Herend porcelain factory.

After the Second World War he travelled to the Soviet Union several times while his artistic career continued unabated. In 1945, he was commissioned with making the Liberation Monument on Gellért Hill, and in 1952 he received a request to produce the Kossuth statue next to the National Assembly. (Today, this statue can be viewed in the square behind the Ludovika Academy.)

He was particularly sought after as a portrait sculptor. Seventy-two of his works can be found in England, in collections, private hands and even in the palace of the royal family. His models came from the highest echelons of politics and the arts, both here in Hungary and abroad. His oeuvre spanning several political systems comprises some 2600 portraits and more than 50 public works. Zsigmond Kisfaludi Strobl was awarded the Kossuth Prize twice, in 1950 and in 1953.

Aside from his work introduced above, many tombs located in Fiumei Road Cemetery also belong to his incredibly rich oeuvre.